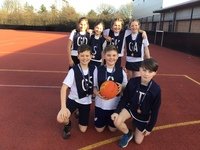 They then played Gawsworth  in a very exciting and nerve wracking semi final.  Despite playing brilliantly they just lost 2-1 in the final few seconds.

They then played Nether  Alderley in the 3rd/4th play off, winning that game 2-0 and coming 3rd overall in the competition.

© 2020 Alderley Edge Primary School.
Our school website, mobile app and podcasts are created using School Jotter, a Webanywhere product. [Administer Site]
We use cookies to provide you with the best experience on our website. Read our Privacy Policy to find out more.